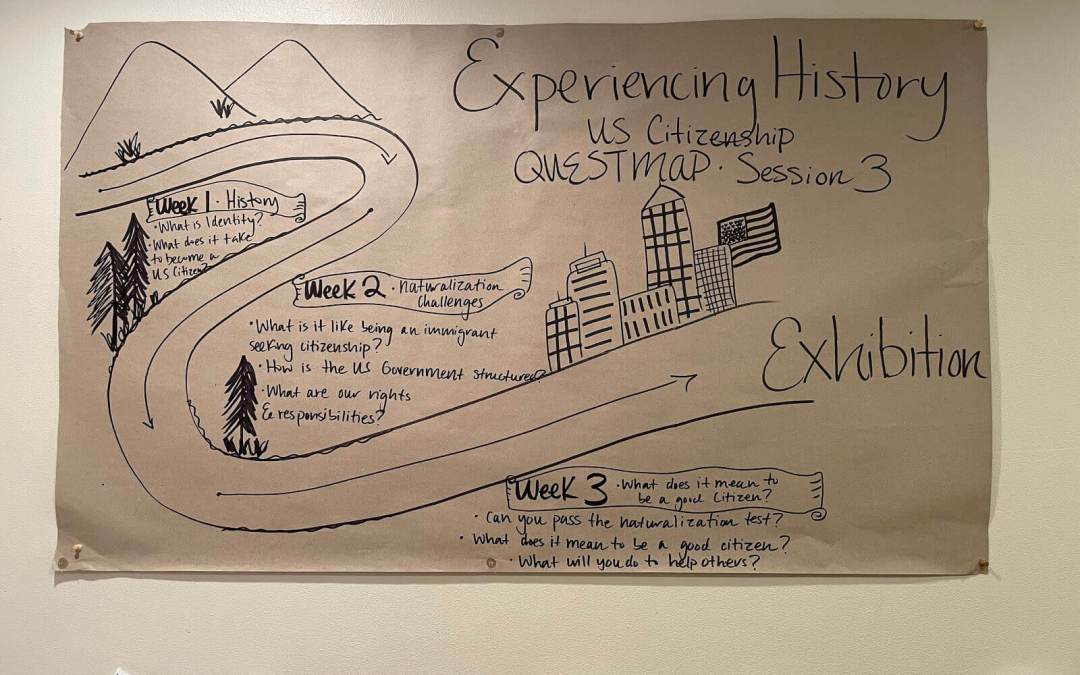 It is always an exciting time to launch off into a new session. The heroes came back from the Thanksgiving break ready to roll and have fun. One learner was eager to summon up everyone with special invites to a special musical planned in the studio, even handing out tickets to the impromptu performance.
As part of a new SMART Goal/Running Partner challenge the Heroes were greeted with a new studio layout and new challenges in Journey Tracker.  They also eagerly dove right into a daily tradition, called D.E.A.R (Drop everything and read).
First, 360 Feedback… “How am I upholding the Studio Promises?”
Upon returning from the break the learners reviewed warm, cool, warm feedback from their Session 2 360 feedback from their Studiomates.  This was the very first time of reflection in this way. Big thoughts and considerations kicked off this session. A question to ponder, “What will I do this session to be a more valuable Studiomate?”
“What can I learn from heroes of the past?”
Session 3 is our shortest of the year bookended by Thanksgiving and a two week Holiday break.  This session, learners are on a Quest to Experience History where they are challenged to go through the process to become an U.S. Citizen, along the way exploring the history of immigration to the United States, and exploring what it means to be a good citizen.
On Friday, several of the learners were challenged to explore creating an infographic and debriefed in sharing their findings based on immigration statistics they researched in a decade of their choosing.
Standing in the shoes… Empathy
One particular launch this week involved reading testimony from an immigrant from the past where the guide asked:
“When you put yourself in the shoes of an immigrant trying to become a citizen, what do you think is the hardest?”
After a spirited debate that learning a new language would be the hardest, a few switched their vote to ‘leaving family behind’. Some of the most powerful Learners ‘stood in the shoes’ which is the pathway to empathy.  Importantly, one sign of a healthy Socratic Discussion is that one can take a stand but is also willing to switch their stance.  At Acton, this Learning to Be is some of the most important learning that happens here.
Discovering self-governance… Town Meeting
An interesting debate arose this week from the learners.
“We should have at least 5 Town Meetings each week” (instead of one).
“We need more vacuums in the studi” “Bringing Donuts in 1 week…”
Town Meeting is where learners can share their voice to make changes needed in the studio, raise questions, ideas, and present solutions.

This week one learner stepped up to lead the entire discussion where they decided on a solution, who is accountable to it, and by when.  How exciting to see where this takes the studio!

In 3 Short Weeks…
The learners have set out in 1 week taking on self reflection like never before, setting SMART goals, taking on new leadership roles, many new challenges in Journey Tracker, and diving right into the “Experiencing History” Quest. In 3 weeks we will reflect on the question, “What have we learned from heroes of the past?”